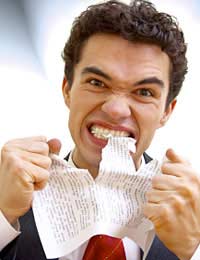 When most people hear the word anger they associate it with negativity when actually this is really quite unnecessary. It is very often misunderstood and is blamed on many reactions seen by human beings. Anger actually occurs as a response or reaction to stimuli, something that we disagree with, are riled by or are highly and emotionally involved in.Anger is an emotion and a way of expressing ourselves providing us with a way of venting frustration. We are all capable to showing anger or becoming angry, but it is what we do with this anger or the level and frequency of this feeling that influences how we are seen by others, contribute to our character and can influence or govern we behave.

Anger As An Emotion

Like happiness, sadness and anxiety, anger is a human emotion felt by everyone. How people deal with their anger or allow it to manifest is one of the things that make us individual. Anger can be expressed very strongly and often inappropriately or in an exaggerated way, equally people can become afraid of expressing their anger entirely allowing it to build up or allowing themselves to give in to the demands of others.The word anger often conjures up images of people yelling, shouting or even being physically violent when in fact anger may also cause a much more peaceful approach and simply stir up feelings of annoyance and distaste which are displayed a lot more subtly than a huge physical outburst.Anger is most likely to occur as a response to a given problem or trigger that significantly aggrieves us and we feel we should object to or demonstrate how opposed we are to the situation.

Anger As A Learned Behaviour

Like many things anger can be learned. As it is a response we may over time learn and believe that becoming angry is an acceptable way of managing any given situation. For example, as young children we are heavily influenced in how we will develop into adults by our parents behaviours. Those who are brought up in a hostile and often angry environment are likely to develop these characteristics themselves as they mature which continues the behaviour for many generations.

Anger Can Be Positive

When anger is directed and displayed in a useful way it can be very positive. If someone is made to be annoyed or angry at a situation it may spur them on to try and make a change. The anger caused can motivate them to want to make a change and keep their interest long enough to see their quest through.

For most people anger is not a big issue and most people either use their anger positively or find healthy ways of managing it before it becomes a problem, but for some anger can become one of the main traits of their character and may have a negative effect on their life. For these people there are several ways of learning how to manage their anger allowing their character to develop in a beneficial way. Control measures and finding out what your triggers are the first steps in breaking the anger cycle and learning how to manage your emotions more effectively and productively.

Anger is an emotion and a normal human reaction. It is a natural occurrence and needn’t necessarily be a bad thing if it is identified and used in a pro-active way.

How to Spot Signs That Your Anger is Out of Control

What is Extreme Anger?

What is Road Rage?